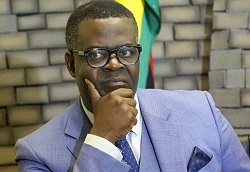 from MARCUS MUSHONGA in Harare, Zimbabwe
HARARE - CRITICS believe the firing of Zimbabwe’s Energy minister is because of his investigation into corruption allegedly linking President Emmerson Mnangagwa.

Mnangagwa axed minister of energy and power development Fortune Chasi last week, the second minister he has dismissed in many months after the firing of Obadiah Moyo as Minister of Health and Child Care also for alleged corruption.

Former information minister under president Robert Mugabe, Professor Jonathan Moyo, claimed Chasi was a victim of his own investigations into alleged corruption linking the head of state and foreign affairs minister, Sibusiso Moyo.

Moyo alleged Chasi fell out of favour with the president when he reportedly attempted to cancel a US$1,2 billion (R20.8 billion) STOIC fuel loan which Chasi claimed benefited Mnangagwa and current minister Moyo.

Controversial businessman, Kuda Tagwirei, was allegedly part of the deal.

Tagwirei was last week slapped with sanctions by the United States government for allegedly financing the human rights violations by government.

Instead, it is believed Chasi signed a deal with rival owners of Total instead, thus threatening Tagwirei’s monopoly in the fuel industry.

“Seeking to cancel the USD 1.2 billion SOTIC deal at National Oil Infrastructure Company (NOIC) is incompatible with Mnangwagwa’s expectations as a beneficiary of the SOTIC deal along with SB Moyo and Kuda Tagwirei,” Prof Moyo stated in a series of tweets.

“The latter (Chasi) has been relieved of his ministerial post in terms of Section (108) 1a of the Zimbabwe Constitution Amendment (No. 20) Act 2013 as his conduct of Government business had become incompatible with the President’s expectations.”

Mnangagwa’s family has in recent weeks been linked to corruption, particularly in the controversy that led to firing of the health minister. His son was allegedly part of the controversial coronavirus (COVID-19) supplies tender.