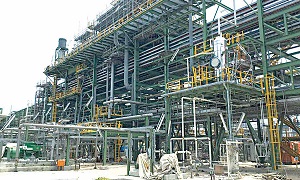 from OKORO CHINEDU in Lagos, Nigeria
LAGOS - AFRICA’S largest oil refinery, which is anticipated to be the biggest single-train structure, is set to be opened early next year.

The Dangote Oil refinery is the brainchild of Africa’s wealthiest man, the Nigerian Aliko Dangote.

It is under construction in Lagos, the commercial capital.

“It is still within the time frame of completion,” Edwin said.

The facility will have the capacity to process 650 000 barrels of crude oil daily.

It will consist of 1 100km pipeline infrastructure, the largest in the world.

The refinery will handle 3 billion cubic foot of gas daily.