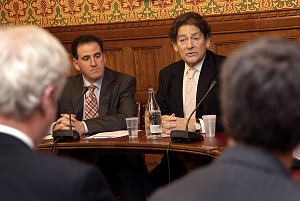 Dr Benny Peiser of the GWPF (left) with Lord Lawson

from MARVIN KELLY in London, Britain
LONDON - A UNITED Kingdom (UK) think tank has labelled the lack of electricity across most of Africa, “a human-rights disaster”, saying it not only held up development but was “a cause of immense suffering”.

Speaking in London on Monday at the start the Energy for Africa Week, Dr Benny Peiser who heads the Global Warming Policy Foundation (GWPF) called on world leaders to “sign irrevocable pledges to supply more than 600 million Africans with the level of energy we take for granted in the developed world”.

Lord Lawson has long championed the task of connecting millions of households and business sites in Africa and Asia that have no electricity or only receive power for a few hours a day.

BELOW FREEZING
“It is winter now across much of Africa and the temperature overnight in highland areas can be well below freezing,” Dr Peiser said. “On the border of Lesotho last week it was -6˚C. And yet millions have no way to cook or heat their homes other than by felling yet another forest for wood.”

According to World Bank figures, in Lesotho just under half the population has access to electricity; in Burundi, Chad, Niger, Burkina Faso and Malawi, it is less than 20 per cent.

“We have so much technology and the price of all these systems has come down so the excuse both for donors and for national governments across Africa about electricity being expensive is no longer there,” he said.

“South Africa and India are two of the world leaders in clean-coal technology and Africa has billions of tons of coal in the ground, along with sunshine, wind and rivers for hydro power.”

Asked about the World Bank and some aid groups reluctance to fund fossil fuel, Dr Peiser described it as “a new form of colonialism”.

“These are sovereign states, members of the United Nations, and yet we have outsiders dictating what they may or may not do with their own resources. If Tanzania or Botswana tried laying down policy to Paris or Washington, we would be astonished and offended.”

TREATING AFRICANS LIKE CHILDREN
He said there were indisputable areas of green policy around which there should be no debate.

“It is not wrong to declare mountain gorillas an endangered species, and insist they be protected. And the same with terrible levels of over-fishing by Chinese fleets in the Mozambique Channel.”

Energy, he said, was different. “Someone getting enough power to run a heater is not a threat to the world. Rather, it is the lack of energy and the lack of jobs because there is no industry that drives people to migrate, either to countries like Kenya and South Africa, or north to Europe.”

The GWPF will launch a series of papers and videos on how to boost electricity in Africa without harming the environment.

Dr Peiser said African leaders were capable of solving the energy problem “if we get out of their way”.

“Things are better now than they were a decade back, but the use of coal and gas is rising whether we like it or not. The World Bank and aid donors must help to burn it with clean technology.

“Above all, stop treating Africans like children who don’t know what’s best for them. That is just colonialism by another name”