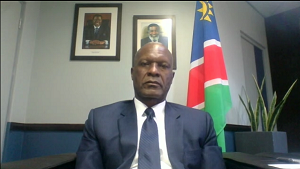 These, coupled with a review of policies, are in the long term anticipated to transform the country from being a net importer of energy into one that is self-sufficient.

This would eventually save the country vast amounts of money in foreign exchange spent on imports, as well as boost the economy whose performance is impacted by unreliable power supplies.

Unreliable power generation is also blamed on an over-reliance on hydropower, which has become unpredictable owing to a succession of droughts caused by climatic change.

Power blackouts at Eskom, the beleaguered energy utility in neighbouring South Africa, which also plays a prominent role in supplies to Namibia, has also exacerbated matters.

There is optimism therefore as the country diversifies its sources and improve energy security.

“There are very positive and encouraging signs when we talk about the hydrocarbons sector,” Tom Alweendo, the Namibia Minister of Mines and Energy, said.

The minister highlighted that on the renewable energy sector, the government has been able to introduce some reforms that had made it possible for independent power producers to invest in the sector and produce clean energy.

Solar and wind have emerged as the most feasible sources, with the Southern African country teeming with these natural foundations.

“We have had a couple of investors that are keen on entering the market and potentially finding something,” Alweendo said.

The Namibian energy sector is a hive of activity.

Among other projects is the Kudu gas energy scheme whose business model the government of President Hage Gengob is studying.

Another key initiative is the barge-mounted refinery in Walvis Bay.

The $370 million project is earmarked to produce 37 500 barrels of oil per day (bpd) but its completion, initially scheduled for March, has been affected by the outbreak of the coronavirus (COVID-19) pandemic.

Namibia had at the time of going to press managed to restrict the virus to 16 cases, with no casualties.

The Ministry of Mines and Energy nonetheless expects to defy the pandemic and complete the multimillion-dollar scheme by the end of this year.

The cross border Baynes hydroelectric dam, an initiative between Namibia and neighbouring Angola to the north, is set to commence construction in June.

Its output of 600MW (megawatts) will be split equally between the two countries.

He encouraged the adoption of practical and realistic energy transition schemes that addresses the continent’s energy needs.

“Oil and gas are going to be around for a long time and will remain a major part of many countries across Africa. The same can be said for clean energy,” Ayuk stated.

He however urged the countries to be environmentally conscious and ensure that lowering carbon emissions remained a priority.

“But, we have to also look at where we stand as a continent and address our needs first,” Ayuk concluded.