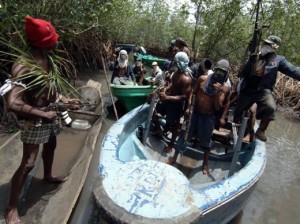 from EMEKA OKONKWO in Abuja, Nigeria
ABUJA - NIGERIA troops have discovered 48 illegal refineries and confiscated oil amounting to over 2,4 million litres during operations against oil theft and piracy south of the country.

Some 15 people held hostage by the suspects have been rescued during the crackdown in the states of Bayelsa and Rivers.

The suspects were holding the civilians in five-speed boats in Bayelsa.

Major General John Enenche, the Nigeria Defence spokesperson, said the rescued victims, recovered items and arrested suspects whom they later handed over to the appropriate authorities (police) at the end of preliminary investigations.

“The general public is hereby requested to continue to give credible information which will assist the military to rid the country of economic saboteurs,” Enenche appealed.

Africa’s most populous country, and the largest economy, Nigeria is also the continent’s biggest producer of crude oil.

However, vandalism, piracy, theft and illegal oil production are major concerns in the West African nation of more than 200 million people.

The government of President Muhammadu Buhari came into power in 2015 with a pledge to fight these crimes and terror by the Boko Haram.