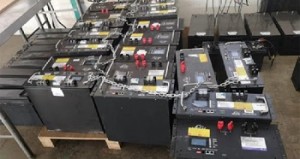 by SAVIOUS KWINIKA
JOHANNESBURG - MTN South Africa has welcomed the sentencing of some culprits behind the menace of battery theft.

Sentences of between five and ten years have been slapped on individuals this year.

Officials disclosed the development on the back of increasing incidents of battery theft at the company’s base stations.

Recent statistics show that 703 batteries were stolen from MTN stations in January alone, with a total of 122 incidents.

“The reality is criminal syndicates are looking for ways around the security measures and this has again raised the bar for the industry and the public, working hand-in-hand with law enforcement and security companies,” said MTN General Manager: Network Operations, Ernest Paul.

Nonetheless, MTN believes its efforts in increasing security measures and introducing high tech solutions and on the ground strategies to prevent battery theft and vandalism at cell tower base stations is starting to see success with as many as 143 batteries, worth R1,2
million (US$79 917) recovered in January.

Meanwhile, MTN bemoaned new rounds of load-shedding, which is increasing the risks, with networks placed under increased strain to get power back-up.

The battery back-up system generally takes 12-18 hours to recharge, while batteries generally have a capacity of 6-12 hours, depending on the site category, the company stated.

“Network coverage is lost if we do not have batteries, while cases of vandalism, cable theft and diesel theft remain high,” Paul said.

He appealed to everyone to join forces to fight against the sophisticated syndicates behind battery theft and vandalism.

“MTN is certainly doing that early in 2020 to ensure we limit the damage and ensure our customers still get quality network coverage,” Paul concluded.