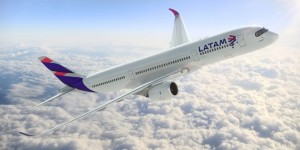 As the star of the Latam Airlines fleet, the Airbus A350XWB is said to deliver radical advancements in engineering and construction, future-fit technology, eco-friendly manufacture and fuel efficiency.

By introducing the airline, the company would almost double its carrying capacity with two more business class seats and 122 more seats in economy.

Latam began flying from Sao Paulo, Brazil to South Africa in 2016 with three flights a week.

These were then increased to five flights in 2017, as the popularity of the route had been firmly established.

Latam stated with extra space and comfort lines in both business and economy class, the route from Sao Paulo to Johannesburg would give travellers to South America a first glimpse of next generation of travel.

Latam is the first company on the Americas to use and receive the wide-bodied plane and emits up to 25 percent less greenhouse gases than other long-haul aircraft.

The expansion of Latam’s South American route further opens up the market and promotes business and leisure travel to domestic destinations in Argentina, Brazil, Chile, Colombia, Ecuador, Paraguay and Peru.